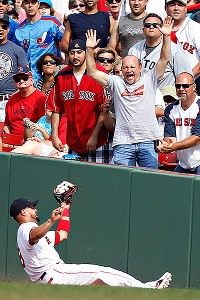 Yoon S. Byun/Getty Images
Shane Victorino makes a sliding catch along the right-field foul line to rob Jose Reyes on Sunday.
BOSTON – Among the reasons the Red Sox want Shane Victorino on the field as much as possible is this: He leads all American League right fielders in DWAR, also known as Defensive Wins Above Replacement Player, with a 1.2 rating.

If that statistic is too exotic for you, consider the latest piece of anecdotal evidence: Victorino’s sliding catch at the foul line of Jose Reyes’s liner in the ninth inning Sunday. If Victorino misses the ball, it rattles around the corner while Reyes circles the bases for an almost certain inside-the-park home run.

Worried about that outcome?

Victorino is not one to typically leave his feet, and that has nothing to do with protecting life and limb, since he certainly has shown no aversion to running into walls.

“Trust me,’’ he said. “If you can catch the ball in the air, do it. Don’t leave your feet. To me, the great outfielders don’t leave their feet. You know who told me that? Garry Maddox.’’

Maddox won eight consecutive Gold Gloves as a Phillies center fielder in the late ‘70s and early ’80s, inspiring broadcaster Harry Kalas to say, “Two-thirds of the earth is covered by water. The rest is covered by Garry Maddox.”

“Watch the good outfielders, the great outfielders,’’ Victorino said. “They don’t dive; they get good jumps. Look at Andruw Jones; he never really dove that much. Andruw Jones ran balls down and caught ‘em low.

“That’s something that always stayed with me. I hardly ever dive. I just try to run through it, work on jumps and stuff like that.’’

In 2007, when Victorino made an Opening Day starting lineup for the first time in the big leagues, he played right field, with Aaron Rowand in center. The following season, he was shifted to center and won the first of three straight Gold Gloves, his defense a big reason the Phillies won the World Series in 2008 and returned to the Series in 2009, losing to the Yankees.

When the Dodgers acquired him in a trade-deadline deal last season, they played him in left field, and when the Red Sox signed him to a three-year, $39 million deal this winter, there was some question about how he would adapt to right, playing alongside Jacoby Ellsbury.

Former Phillies manager Charlie Manuel, asked at the winter meetings about Victorino in right, said not to worry.

“Charlie always said, when I played with him, ‘If I had a great center fielder, I’d put you in right field,’’’ Victorino said. “Even when I won my Gold Gloves, he’d still say, ‘You’re my best right fielder.’’’

Besides, Victorino said, playing right field in Fenway is like playing center in a lot of other ballparks. “Still as much ground to cover,’’ he said, “except when you get to the corner and run out of real estate.

“But it’s still like playing center field, in how you attack the ball or go back on the ball.’’
Like Manuel, Sox manager John Farrell has quickly grown to appreciate what Victorino brings.

“One of the main reasons he’s been signed here is to cover that ground,’’ Farrell said when asked about the Reyes catch, “and he did just an outstanding job again today. We’ve seen it a number of times. I can’t say that we’ve become accustomed to it, or take it for granted, the range he has out there, but he’s made many, many plays equivalent to today’s.”