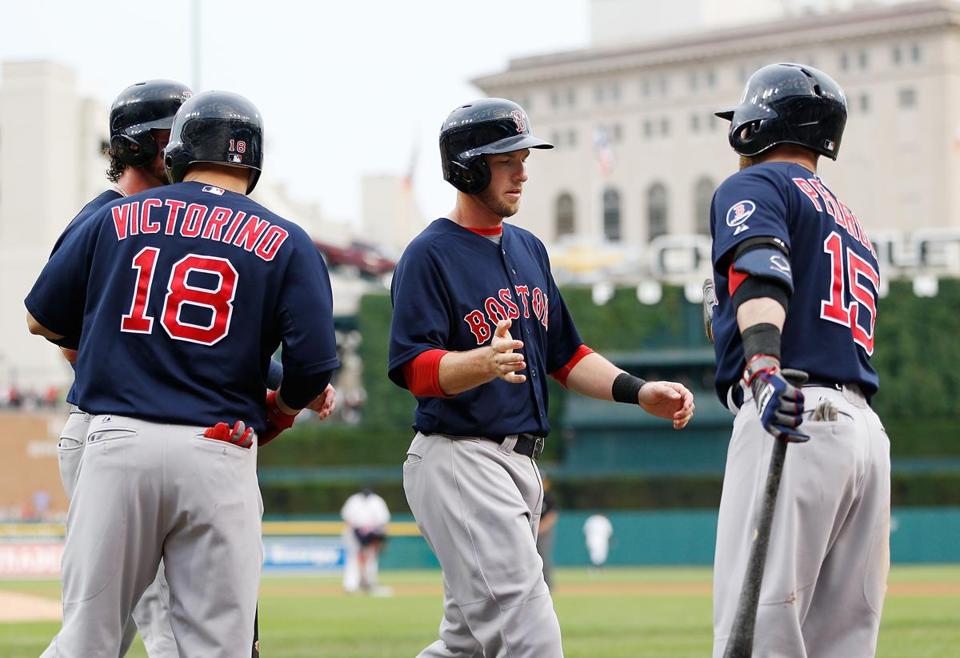 DETROIT — Shane Victorino was getting sick and tired of the part-time role he had to assume because of back and hamstring injuries.

It killed him not to play every day. The Red Sox were cautious not to overplay him when he came off the disabled list, using common sense to keep him healthy.

But the time came — at least in Victorino’s eyes — to throw caution to the wind. He met with manager John Farrell before the game and plead his case to play every day. No more kid gloves.

On Friday night the gloves came off. Victorino went 4 for 5 and matched his career high with five RBIs in Boston’s 10-6 win over the Tigers. The Red Sox need Victorino in the lineup every day because, as we’ve pointed out on occasion, he is that blood-and-guts player, the most aggressive player on the field who runs into walls or dives face first into the grass to win games.

He’s a dirt dog and dirt dogs want to play all the time.

He provides a natural energy.

And those types of players like to set the tone, such as his solo homer in the first inning did against Doug Fister, a pitcher he had never faced.

“He threw the same pitch on 3-0, so I had an idea of what he was doing,’’ Victorino said. “I watched video before the game because I never had seen him pitch before. He didn’t have his ‘A’ game. He left some balls over the plate a little bit more. I watched some of his previous starts when his sinker was working. He was tough. We were able to lift the ball and get him out of the game early.”

He did what no Red Sox right fielder has done since Trot Nixon back in 2000 — knock in five runs.

“It’s just a matter of my body feeling good,” Victorino said. “It’s a matter of consistent at-bats and having my body feel good. John and I spoke about it to continuously go out there and help this ballclub win.”

Asked if he convinced the manager, Victorino said, “Yeah, I tried. We’re going to pay attention to what’s going on. I’m doing my maintenance program, my body feels good.”

Even in the heat of battle Victorino likes to have some fun. He almost threw Miguel Cabrera out at first base on a single to right. He threw hard to first and Cabrera had to hustle to beat it.

“I don’t think it was that close,” Victorino said. “Earlier in BP we were giggling a little bit. [Cabrera] came up to me and said, ‘I see you’re trying to throw guys out at first.’ I said, ‘You better run.’ Actually, in one round in BP he was calling my name and swinging that way [to right]. Tonight, when he hit that ball and he looked at me and I said, ‘You better run.’ ”

And Victorino, who has the best throwing arm in right field for the Sox since Dwight Evans, said, “I’m going to keep staying aggressive. It’s something me and Mike [Napoli] talk about. I’m not going to get gung-ho and throw all over the place, but I’m going to pick my spots.”

It’s in his nature to be aggressive, whether it’s in his swing, his running, his fielding. He’s exactly the type of player the Red Sox need. While Jacoby Ellsbury provides some of what Victorino has, there’s an extra level of energy, which shows up in various acts during the game.

There was no player more distraught after the 4-3 Tigers’ walkoff win Thursday night than Victorino. He hates to lose. Yet he was as sympathetic to Andrew Bailey’s plight as anyone in the clubhouse and wishes him well in trying to re-establish himself as the team’s closer.

“This team kind of reminds me of the years in Philly when we were successful,” he said. “We need to forget the last day and move ahead. I’ve already done that. It was a good day. Any time you get four hits and five runs, it’s a very good day, but we have to face [Max] Scherzer and he’s 10-0 and he could win the Cy Young.”

Victorino is now batting .292 and he’s been able to stay steady from both sides of the plate. He also has five outfield assists. The No. 2 hole in the lineup suits him and has been able to do some exciting things on the base paths along with Ellsbury, creating a lot of first-and-third situations and hit-and-runs.

Yes, Victorino has been a little bit down because he hasn’t been able to be the player he wants to be here. Too many games missed, too many opportunities left unable to compete. He feels that finally his health is on the upswing and that he’ll be able to thrive from here on out.

He hopes Farrell heard what he said and that his plea to be a regular player again was heard loud and clear.

You can see why — 4 for 5 and five RBIs against the Tigers.