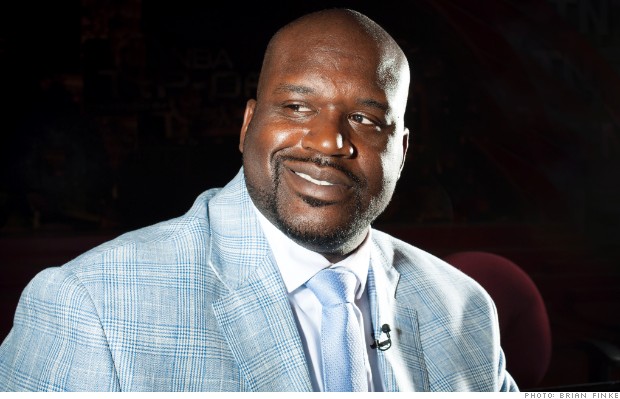 Now that he’s retired from basketball, Shaquille O’Neal wants to be a business superstar. And he’s decided to get a Ph.D. in Organizational Leadership to prove it. He’s been a student for several years at Barry University, outside Miami. His dissertation: “The Duality of Humor and Seriousness in Leadership Styles.”

He’s got the funny part down pat. When you’re 7-foot-1 and a few ounces under 325 pounds – when you’re the largest animate object outside of Sea World – you know that absurdity’s never far behind. The dimensions that made you a nonpareil NBA superstar also mean that your hands are so big you can’t put on your own cufflinks. And that the bedroom closet in your 63,000-square-foot home is three stories tall. And that an ordinary restaurant booth can be daunting. I recently talked to O’Neal during this year’s daylong “Shaq Summit” – a gathering of his business partners – and when we sat down at Fleming’s Prime Steakhouse in L.A., there was room under the table for only his legs. “Where do I put mine?” I asked. Chortled O’Neal: “I get that a lot.”

Among O’Neal’s many endearing, surprising attributes is that he embraces his own ridiculousness. But it’s mastering the second part of his dissertation topic that will determine if he’s a fleeting marketplace fancy or has the brand staying power of ex-athletes like Michael Jordan. “To be successful,” O’Neal told me, “you have to modulate between stern and funny. Me? I’m 80% humorous and 20% serious.” His e-mail identity nicely connotes the latter: He may forever be the mononymous “Shaq” to rabble like you and me, but it’s “Dr. O’Neal” that’s part of his e-mail address.

The dollars he’s piling up suggest he’s got the right balance. His haul last year was $21.5 million in endorsements, licensing, and entertainment contracts, a total that’s projected to grow at least 10% in 2013. He has deals with TNT, as a basketball pundit, and Buick, as a pitchman; an inaugural line of headphones with Monster Cable; and a new campaign with Arizona Beverage that will put 50 million Shaq Soda cans in circulation in June. The following month he plays a cop in Adam Sandler’s latest effort at cinema, Grown Ups 2.

More, though, than any specific deal, it is Shaq’s reach across the business ecosystem that’s special. Jordan hawks shoes and other products. Sure, O’Neal has the drink, a videogame, 150 car washes, and 100 million pairs of sneakers sold, which will soon include a $160 retread of the classic Reebok Shaq Attaq. But in addition to peddling Gold Bond, Icy Hot, and manly jewelry at Zales, he’s on cable, he has a comic book in development, and he’s a Silicon Valley investor.

He makes more now than he did most years throwing down slam dunks. “I’m the happiest kid in the world,” O’Neal says. “My body’s not banged up anymore. I get to wear suits every day. I get days off when I want.” It may sound too easy. Yet making “Shaq & Co.” thrive also requires just letting Shaq be Shaq.

He actually has two personas. On the hardwood he was ferocious. Off the court he’s goofy, sweet, soft-spoken. He lives for publicity stunts, like the time he conducted the Boston Pops in tie and tails. When a teen rapper named Aaron Carter challenged him in 2000 to a backyard game for Carter’s video, “That’s How I Beat Shaq,” O’Neal played along and lost. This past March, O’Neal shrewdly demanded a rematch in O’Neal’s own mansion. O’Neal won 116-0, making the whole thing an installment on his lowbrow Thursday night TruTv series, Upload With Shaquille O’Neal. (Thumbnail review: Where there’s a kitten involved, hilarity ensues.)

At heart, the 41-year-old O’Neal remains a child in the best sense. The most penetrating – and delightful – exchange I had with him wasn’t about market segmentation but breakfast cereal. He doesn’t like Wheaties. After he won a championship with the Miami Heat, General Mills wanted him on a Wheaties box. Until the Heat made him do it, he declined. “I told my guys, "Get me a deal with Frosted Flakes or Froot Loops!” (Alas, Tony the Tiger and Toucan Sam wouldn’t stand aside.)

O’Neal is an Everyman in an otherworldly body – and his ability to project a basic goodness explains why he’s in marketing demand. Admire Arnold Palmer for his skills, but you’ll never see him giggle. Maybe you buy his merchandise because it identifies you ever so slightly with his magic. But it’s not because you simply like him. You can bet that Magic Johnson never would’ve agreed to let Larry David accidentally trip him during a game, all for the benefit of a Curb Your Enthusiasm episode.

From early on, O’Neal was an object of Madison Avenue’s desire. By the mid-1990s he had deals with Pepsi, Reebok, and Taco Bell. Still, in the fickle universe of athlete endorsements, popularity can be fleeting. That he’s more of a marketing phenomenon today than he was in his NBA prime is partly due to luck: He’s instantly recognizable. But he works hard at it. Shaq & Co. assembles his two dozen corporate partners at the summit to compare notes, share ideas, and invent Shaq suffixes like “Shaq-tivate” and “Shaq-i-licious.”

Unlike some celebrities, O’Neal doesn’t want to get in the weeds with his handlers. When he learned at the summit that his brand was reaching not only China and South America but Iraq and Tunisia, he inquired, “Where’s Tunisia?” He might have been kidding, but it doesn’t matter, as O’Neal’s charm works either way. It was only weeks ago that he discovered what Shaq Soda tasted like – which seems odd when the flavors are a rather distinctive Blueberry Cream, Strawberry Cream, Orange Cream, and Vanilla Cream. Indeed, O’Neal seemed barely more interested in the enormous images of his head adorning the 23.5-ounce cans. There’s Shaq grinning, Shaq smirking, Shaq with his mouth wide open, and lots more.

The funny faces are a perfect example of a marketer playing to O’Neal’s strengths. You’ll buy Shaq Soda not because you particularly trust his palate but because he’s a fun guy to be around. “I can reach children 2 to 80,” O’Neal says, “just by feeling them out. First thing I do is to see if they’re ticklish. And then most times they smile at me.” Although he does have a fondness for cream soda, his decision to be a partner with Arizona – he’ll get a small percentage of wholesale sales – was based chiefly on a desire to help the beverage maker launch a new category.

But O’Neal is no mercenary of commerce. He says he never asks about the money. Back in 2011, when TNT and ESPN were bidding for his services, O’Neal wanted to know only why they wanted him. ESPN said he could help it surpass TNT’s No. 1 basketball show. TNT (owned by Time Warner, which owns Fortune) emphasized he’d be joining a family. “Turner allowed me to be myself,” O’Neal says. When your net worth is more than $300 million, it’s plenty easy to say you’re not in it for the money. Even so, O’Neal sounds believable when he insists he just aims to “connect” with millions of people. After all, you can’t be a celebrity if nobody notices anymore.

More basically, O’Neal’s need to perform in business is rooted in an elemental insecurity. When he was an undergraduate at LSU, he had to produce a Boudreaux’s Butt Paste commercial for a marketing class. His professor gave him a C and, O’Neal recalls, gratuitously  added, “I hope you make a lot of money in basketball, because big men don’t sell.”

Ever since, O’Neal says he’s been trying to prove the professor wrong. “In the time we live in now, I’m called ‘humorous,’ ” he told me, as I sat Indian-style in the restaurant booth. “When I was growing up, it was called being an ass or the class clown. That was my way of getting people to say, ‘You’re big, you’re not like us, but you’re funny – we like you.’ I wanted to be loved.”