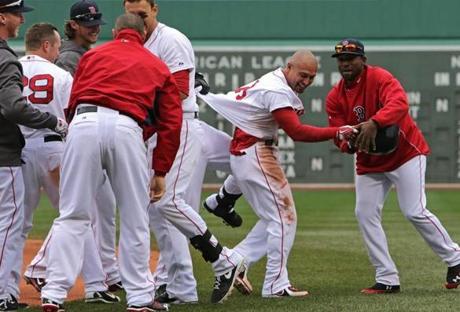 Shane Victorino nearly has his shirt ripped off after getting the winning hit Saturday.

Tampa Bay catcher Jose Molina, one of the slowest players in baseball, started the 10th inning Saturday by legging out a double after hitting the ball down the line in right field.

It took some time for it to happen. But that double led to Shane Victorino being pummeled by happy teammates when the Red Sox walked off the field with a 2-1 victory.

Molina was replaced by pinch runner Kelly Johnson, who did not score when Junichi Tazawa retired the next three hitters. Rays manager Joe Maddon then sent Jose Lobaton out to catch the bottom of the inning.

When Jacoby Ellsbury singled with one out, Red Sox manager John Farrell had him on the run. Lobaton has caught only 18 percent of base stealers in his four-year career, none in five tries this season.

Brandon Gomes, a righthanded reliever with a deliberate delivery, also was unlikely to keep Ellsbury from getting a good lead.

“We had a real good opportunity to steal a base. Not just because of Jake’s base-stealing ability. But it felt like the combination there was something we might be able to take advantage of,” Farrell said.

Ellsbury stole second easily and took third when Lobaton’s throw ticked off the glove of shortstop Yunel Escobar and went into right field.

With Victorino at the plate, the Rays pulled the infield in and brought left fielder Matt Joyce in to play third base. They had their other infielders shift to the right side.

The Sox had Ellsbury going on contact as Victorino hit the ball hard on the ground to the right side of the mound. Escobar dived to stop the ball but had no play from his knees.

The Sox (6-4) had a win thanks to a fortunate series of events.

“Put the ball in play and, hey, we won the ballgame,” said Victorino, whose jaw was sore after being accidentally smacked in the postgame pileup.

A crowded infield didn’t deter Farrell from having Ellsbury go on contact.

“That’s the type of game we want to play,” he said. “We want to force the defense, to put pressure on them.”

Said Ellsbury, “When I saw him dive, I knew I was getting in no matter what.”

Victorino was excited to play a leading role in the first walkoff victory of the season.

“The crowds have been amazing. I’m loving every bit of it,” he said. “I’ve always said that when I signed here, I loved those days when I was an opposing player coming into a place like Fenway and watching the crowd.”

It seemed certain that one scratched-for run would win this game given the performance of the starters.

Jon Lester allowed one run over seven innings and retired 14 of the last 15 batters he faced. Tampa Bay’s David Price gave up one run over six innings and stuck out eight. The relievers, with some notable exceptions, were just as effective.

Lester has given up three earned runs on 15 hits over 19 innings in his first three starts with three walks and 18 strikeouts. The Red Sox have won all three of those games despite facing Cy Young Award winners in CC Sabathia, R.A. Dickey, and Price.

“We fully expected Jon to get back to the levels that he’s pitched before,” Farrell said. “We stated in the offseason, he’s healthy, he’s got good stuff. There’s no reason he shouldn’t get back to that performance level and he’s doing that.”

“It’s been good,” he said. “Been able to make some adjustments from the first start and get a little deeper in the game. If we keep doing that, things will take care of themselves.”

Tazawa, the last of five Red Sox pitchers, was the winner. The Rays were held to six hits and were 0 for 11 with runners in scoring position.

After Andrew Bailey took care of the eighth inning, Sox closer Joel Hanrahan walked the first two Rays batters in the ninth and Farrell replaced him with Koji Uehara.

Uehara worked out of the jam in nine pitches, saving Hanrahan from what could have been his second loss in four days.

Farrell said after the game that Hanrahan is still his closer. But there was less conviction in his statements than was the case on Wednesday after Hanrahan allowed five runs in the ninth inning against the Orioles to blow a save.

“No move’s going to be made,” said Farrell, who did say he needed to speak to Hanrahan about how best to proceed.

Victorino, who came up in the Dodgers organization with Hanrahan, has faith in the righthander.

“I look at what we did as a team,” he said. “Joel will be back. It’s a little bump in the road for him. As an outfielder, listening to some of the reaction kind of frustrates me. Look at the overall; our pitching was great. All those things got me in the situation I was in.”