WALTHAM, Mass. – Shaquille O’Neal was introduced as a member of the Boston Celtics on Tuesday morning, saying the sole reason he came to Boston was to try to add to his title haul and is willing to play any role Doc Rivers envisions for him. 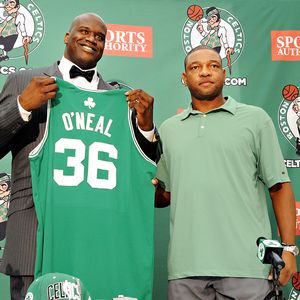 Darren McCollester/Getty ImagesA star for most of his career, Shaquille O’Neal said he will take any role Doc Rivers sees fit for him.

“I’ve done everything individually that I’ve set out to do,” O’Neal said. “Now, toward the latter part of my career, it’s all about winning.”

O’Neal, who was decked out in a pinstriped suit and a bow tie for the introduction, could start the season as the Celtics’ backup center, with Jermaine O’Neal taking the starting spot while Kendrick Perkins works his way back from knee surgery. No matter the role, the 38-year-old Shaq insisted Tuesday that he still had the same fire.

“I still have hunger, I still can play, I still want to win,” O’Neal said. “When I close my book at the end of the day it’s all about winning, nothing else.”

Shaq, who has won four NBA titles over the course of his career, told reporters he had hoped to end his career with five or six titles. He signed a two-year deal with the Celtics in what is likely his final NBA contract.

Rivers, who sat next to Shaq during the press conference, said the team had hoped to address a rebounding weakness in the offseason and that the addition of O’Neal went a long way toward doing that. He also noted that Shaq’s ability to get opposing defenders into foul trouble will be an added benefit.

O’Neal also thanked new teammate Kevin Garnett, who flew in from Hawaii to be at the press conference.

In terms of nicknames, O’Neal said he liked the Big Shamrock but was also partial to the Big Green Mile.

The team also announced that it had signed rookie Luke Harangody to a contract, leaving the roster at the maximum of 15 players. The number, however, includes Rasheed Wallace, who plans to retire.